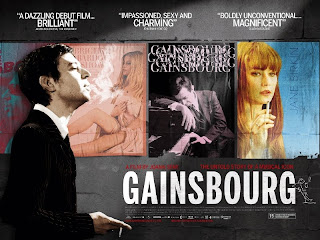 Because I am still living in Paris in my head I have continued to keep up the Parisian theme. Last week I watched Gainsbourg: A Heroic Life, it was a good film, not amazing but a must see if you are a Gainsbourg fan. I particularly enjoyed the opening sequence cartoon, as well as the 'monster' that follows him about during the film,  the way the monster moved reminded me of Doug Jones, who plays the faun in Pans Labyrinth; very creepy but elegant.

The film starts off with Serge's childhood in Paris, as the Nazi occupation starts to become apparent in Paris. It then jumps to Serge as struggling artist, and then follows on to his singing career. Including his brief affair with Bridgette Bardot and his relationship with Jane Birkin, and his eventual decline in popularity. Since watching the film I have been listening to Gainsbourg none stop (I was not a fan before).
I cannot stop listening to Bonnie and Clyde, thought this making of video was intriguing. Are any of you Gainsbourg fans?