Now I had some crazy expectations about what the flea markets would be like in Paris, I had visions about needing to buy an extra suitcase for all my treasures, however I was rather shocked how expensive everything was. It was lovely to go around Port de Clignancourt, but all of the items I came across were way out of my price range. Plus with my school girl French I could only ask how much something was then I would look rather puzzled (stupid) when the owners would continue to speak to me in French. Thankfully, Port de Vanves was far more fruitful, still most of the clothes were out of my budget, but I managed to get these beauties:
This was my first purchase, very Swan Lake don't you think? I cannot figure out how to wear it yet (I know on my head) but it seems a lot larger than similar hats I have like this so it's difficult to position it on my head. 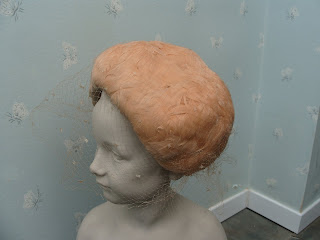 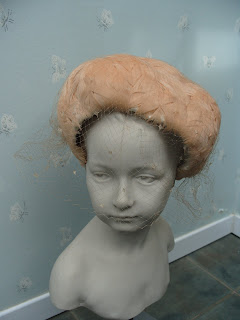 I circled this green beauty twice until I could figure out whose stall it belonged too, and for 15 euros I was rather chuffed, I love the hair pins and net, it does seem to be missing a feather, but I don't mind. 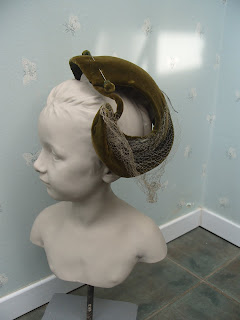 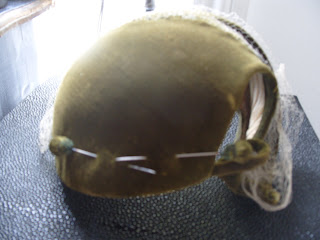 I adore this snood with little pom poms, and velvet ribbon bow detail, I wish I either had lighter hair or it was a different colour as it does not show up well against my hair, but I still love it. 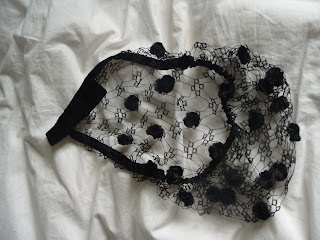 There was a number of Jacques Tati posters there that were around 35 euros but then Ben pointed out it would be difficult to get them back home, I still keep daydreaming about them. As well as an Edwardian day dress that I turned down as it was 50 euros, I am now kicking myself should have got it! If any of you happen to come across a reasonably priced Edwardian dress on-line please let me know.


The next place I found some treasures was Coiffeur, in Marais, it was more like a retro shop than vintage, but I got three white blouses, two hats, one long sleeved t-shirt and a dress all for 40 euros. The place was very busy, and rather tiny, but everything was priced reasonably so I was rather giddy. I came out rather hot and tired but with a massive bag and a big grin on my face.


This hat reminds me of Scarlett O'Hara, something that she
would of worn to a picnic perhaps, when I tried it on afterwards Ben cringed in dismay and informed me that I bought some weird stuff (it was more harsh than that readers). 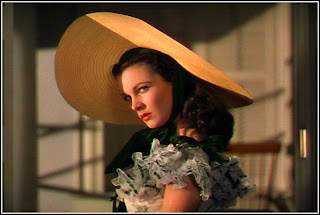 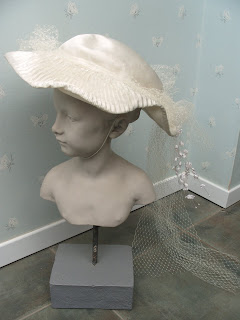 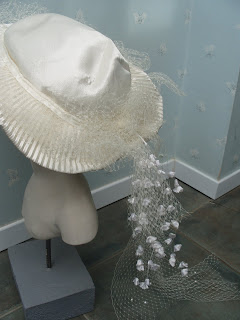 This second hat I have been after something like this for ages, it is a little too small for my big head but I have still been wearing it. 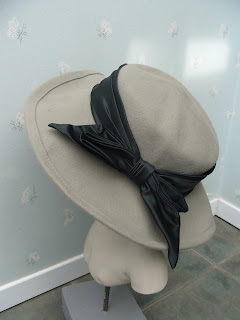 These three 1980s shirts are so cute, but I am struggling to decide what to wear them with? I wore one of them with my Katherine Hepburn trousers, but still wasn't pleased with the silhouette it gave me (i.e. dowdy) any ideas would be welcome. The first one is my favourite, but definitely needs the shoulder pads taking out as I look like an American football player (I have broad shoulders as it is). 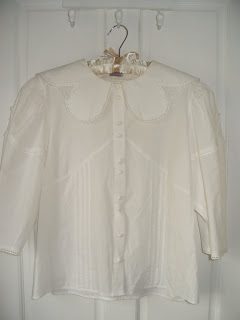 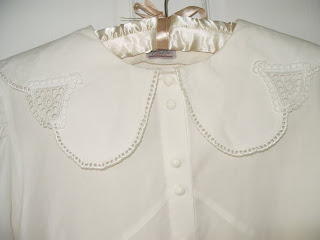 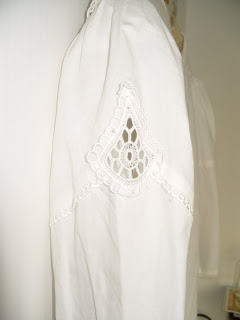 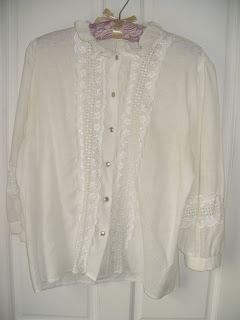 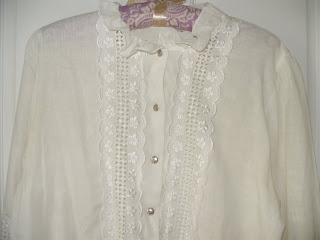 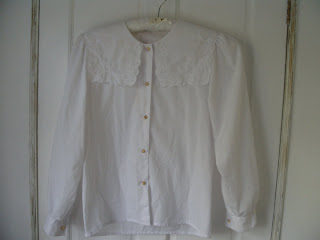 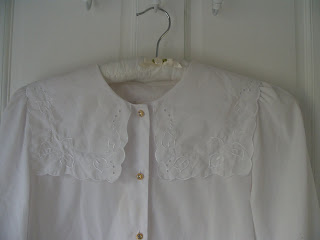 I do feel you can never have too many stripey tops, I got this from the men's section and when I saw the Navy Line on it I had to buy it, gotta love all things nautical. 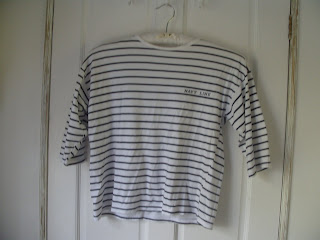 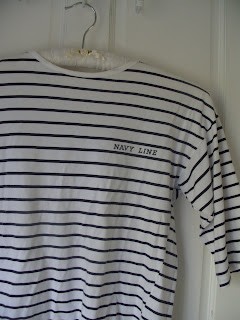 This peach dress I am not sure when it's from, probably 1970s, I wasn't too sure about the colour at first but I like it now. I have already worn this down in the catacombes. 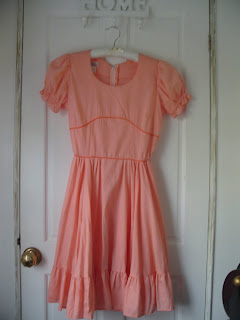 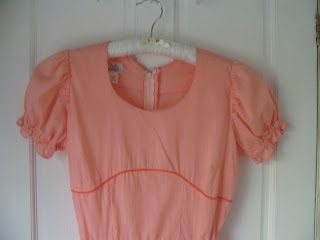 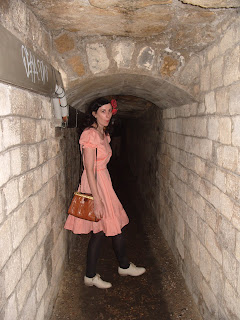 Now this dirndl flowery number I found in a random flea market in Marais, I have no idea what it was called but it was sprawling down a few streets on the Sunday, and had some very reasonable priced dresses and I couldn't resist this for 10 euros. 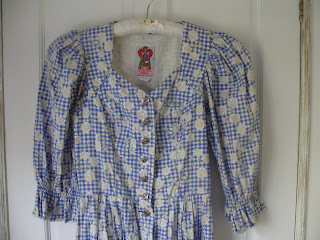 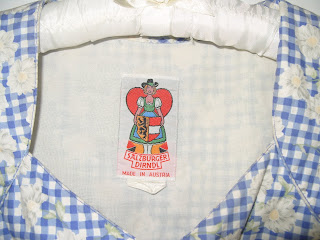 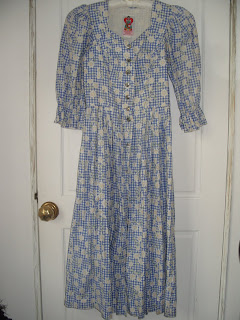 This handmade dress is a bit too big which I will probably just use a belt to cinch in, it's handmade so it's difficult to date. It has very cute pleat detail at the bottom, I found it in a crazy vintage store called Eileen (not come on eileen) , there was about four rails in there and then a massive pile on the floor, I did not have the energy to make my way through the pile, but surprisingly everything was priced. I need more day dresses like this in my wardrobe, as I have lots of dramatic clothing that are not perhaps suitable for everyday wear. 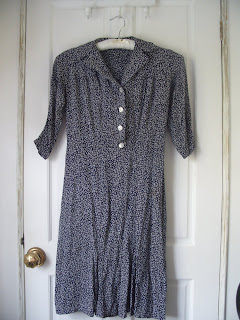 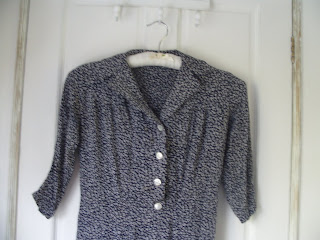 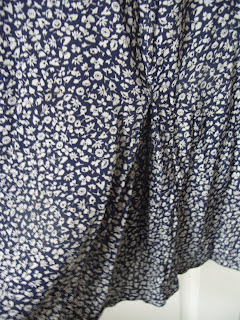 Then finally here is my touristy buys, I can not help myself I love this cheap kitsch tat! A light blue beret for 4 euros, a set of six drink mats for 4.50 and three (the other one isn't there) Eiffel tower key rings for 1 euro oh and a great big scarf with the iconic sights of Paris on for 2.50. I still have euros left over, which I am now going to save until the next trip, as I need something to look forward to already. 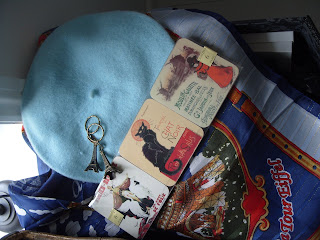